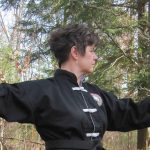 The practice of Tai Chi, which is sometimes called “moving meditation,” fosters a calm, tranquil mind. It is a gentle way to fight stress, improve balance, and enhance wellness. Mary Gill-Scott has studied Qi Gong and Yang style Tai Chi since 2006. She received her training from Master Lawrence Childs, 5th degree Black Belt, at Three Treasures Martial Arts in Corning, and Grandmaster Kenny Kuek, 8th degree Black Belt, at USA Masters Academy in Canandaigua. She earned the certification of Black Belt and began instructing in 2012. She has traveled to Malaysia for training as part of an International Martial Arts Exchange. Mary has competed in martial arts tournaments, medaling in both silver and gold, as well as participating in numerous local demonstrations. She has also been the recipient of several awards, including Tai Chi Student of the Year, and Instructor of the Year. In 2013, she began teaching Tai Chi Wellness at 171 Cedar.

“I practice Tai Chi for its health benefits, such as rejuvenation, wellness—both body and mind—and stress management. It has improved my balance greatly, and aided in my recovery from a neck injury.” In today’s fast-paced world, Mary believes everyone can benefit from Tai Chi.