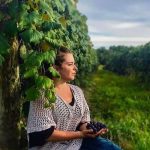 Hilary Niver-Johnson has been involved in Finger Lakes Wine and Food industries since 2004. Her research involving wine-grapes began in 2010 when she was in her senior year at the Environmental Science and Forestry College in Syracuse, NY. Originally, she was interested in producing grape-seed oil for nutraceutical applications.  However, she realized that there was much more food potential from wine-pumice. Wine Flour was born in 2014 and released to the public in 2015. Since then, her passion for sustainable food production shines by breaking the boundaries of the culinary world with her wine powders. These flours turn traditional recipes into flavorful, colorful, and nutritional recipes and have a vast array of culinary applications.