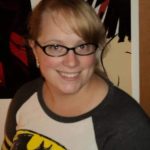 Artist and Instructor Emily Swan has been involved in art and dance at 171 for nearly 30 years. She transitioned into teaching in 2009, after having earned her Bachelor of Science in Media Arts and Animation from the Art Institute of Pittsburgh. Through teaching she is able to bring her love of the animation and comic book mediums to her students. She has taught Cartooning, Anime, Cartoonime, Creature Creation, Lyrical Illustration, Intro to Comics, Ballroom, and Swing. Emily was excited to add Teen Swing to her roster in 2017, of which she was a founding member in 1997.
She has participated in numerous Patty Ozer Story Ballets, starting in 1996. One of the personal highlights of her time at 171 is creating artwork for the story ballet, something she has been proud to contribute since 2011.
When she’s not teaching at 171, she can be found working on illustrating and traveling to sell her art at Comic Cons.