An event every week that begins at 8:00 am on Monday, Tuesday, Wednesday, Thursday and Friday, repeating until January 11, 2019

An event every week that begins at 8:00 am on Saturday, repeating until January 5, 2019 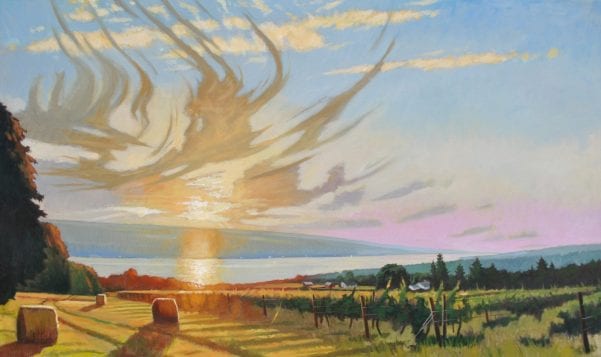 This show of my recent paintings at 171 Cedar Arts Center is a collection of recent plein air and studio works focusing on the beauty of Seneca and Keuka Lakes.  The title of this show, “Luminous Lakes”, suggest my interest in painting the ephemeral effects of light and atmosphere as it plays on and describes the topography of these landscapes.  Working out of doors, from observation is source of inspiration and connects the process to that direct type of painting popularized by the impressionists painters and before them to the proto-impressionist French artist, Jean Baptiste Camille Corot.  Taking the immediacy of portraying the motif in oil into larger studio works, of which there are several in this show, adds a sense of authenticity to the imagery.

My interest is also in connection to and conveying a sense of Americana or how the land, agrarian tradition and architecture all indicate a unique place. These specifics of history and locale also become a spring board or window into more primordial aspects of nature, such as light, wind, rhythms and atmospheric beauty. – Brian S. Keeler 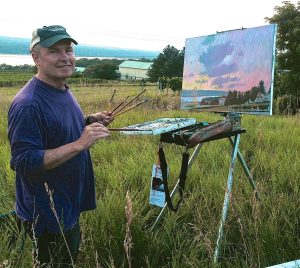 Brian Keeler was born in 1953 and he began his art study early in life as his father was a painter as well. More through osmosis than direct teaching he was inspired to paint and encouraged by his father’s example.  He continued to have an interest in drawing and painting throughout his youth, which led him to study first at Keystone College near Scranton, PA and then at the York Academy of Arts in York, PA.  While in York he studied realistic painting under the auspices of Tom Wise, Ted Fitzkee, Virgil Sova, William Faulkner and others.  He has since studied with several other accomplished realist painters including Dan Greene, Everett Kinstler, Jack Beal and Nelson Shanks. Graduating from the York School in 1975, he has pursued his career as a fine artist ever since while winning numerous awards and having shows throughout the northeast and beyond.  Portrait painting was the mainstay early on in his career with landscape and other explorations taking precedent later, but his work always showing a decidedly realist and representational preference.

Several years ago, he moved to Ithaca, NY, but maintains a studio in his hometown of Wyalusing, Pa.  He primarily devotes his time to painting landscapes, still lifes, figures, and portraits in oil, pastel and watercolor.  His teaching has included giving workshops at various schools and art associations as well courses at Keystone College.  He has also been a rostered artist with the Pennsylvania Council on the Arts which facilitated art residencies at high schools under the aegis of this state arts organization.

Brian has made the landscape and cities of Italy one of his painting projects since 1992 and since 1994 he’s conducted a landscape and figure painting class there in the medieval hill town of Barga, in northern Tuscany and just outside of Todi, in Umbria.

In the spring of 2004 he was honored with a retrospective of his own work along with his father, William Keeler’s paintings at the Everhart Museum in Scranton, PA.   Brian Keeler authored a book about his father’s work that served as the catalog for this show.   The book titled, “The Art Work of William Keeler- Pennsylvania Regionalist Painter” and was published in the spring of 2004 by River Light Press.

In 2016-2017 another retrospective type of exhibit of Keeler’s work was held at the Roberson Museum in Binghamton, NY. A catalog and documentary DVD were produced to record this exhibit. This exhibit included 95 paintings shown mostly in the Sears Harkness Gallery of the Roberson.

Involved locally in many arts projects, Keeler founded the Blue Heron Gallery in Wyalusing in 2002 and served as its director for 10 years, and he also originated the North Branch Art Trail and Festival in 1993.

Brian Keeler has focused on the Susquehanna River as one of his main sources of interest for many years.  He derives the primary source of inspiration for his river images from the beautiful stretch of river in Bradford County, but he has also depicted the river shores in the Wyoming Valley near Wilkes-Barre and throughout the river’s course.  His oil paintings are often begun with quick pencil sketches or studies done in pastel or with oil, usually in a smaller scale on location.  He values the time on the river as an important part of the picture-making process.  Sometimes stopping to paint while driving past a favorite location or in a kayak when he paddles out to paint these studies from direct observation, they all have their own way of contributing to studio paintings.  His outdoor painting is done very much in the tradition of the Impressionists or like the original plein air painter, the 19th century French artist, Jean Baptiste Camille Corot.   After making studies outside, Keeler then goes back to his studio and creates larger format oils based on these first-hand compositions and from photos he takes during the days on the river.  He feels that there is something irreplaceable about being outside and experiencing nature first-hand while creating paintings in a single sitting.  Feeling the air, hearing the ambient sounds of nature and even the background sounds of traffic, lawnmowers and people, seeing the effects of light and serendipitous occurrences of nature all contribute to an emotional connection to his subjects. One of the artist’s main attractions to any given landscape is the quality of light and the play of light on shorelines, clouds and topography.  He especially enjoys the contrasts of the area’s older buildings in combination with newer more banal architecture, set against that natural beauty of the river’s edge.

Keeler’s work has won wide acclaim over the years. His paintings have been collected by many individuals, corporations, and museums. His work has appeared in feature articles in American Artist Magazine in 1992 and 2003 and in 2006 Pastelogram, a journal for pastel artists featured his art. Two books have been illustrated by Keeler in collaboration with their authors, one a children’s’ book and the other a treatise on a mystical theme. He also authored an art instructional book, Dramatic Color in the Landscape, published in 2014 by North Light Books.

Keeler’s paintings are represented at the following galleries – Laura Craig Gallery in Scranton, West End Gallery in Corning, NY, The Argosy Gallery in Bar Harbor, Maine and the FAN Gallery in Philadelphia, PA.

PAUSE is extended, and we will comply as a Phase 4 arts organization according to NY State requirements for reopening. Until we can be together at 171 again, please enjoy our Facebook Live classes and dance challenges, and sign up for our Online Classes!
Please check back for updates, and read our Member e-newletter.
Thank you for your patience and continued support.